Dublin Thunder is coming with Moran, Mitchell and Gurley 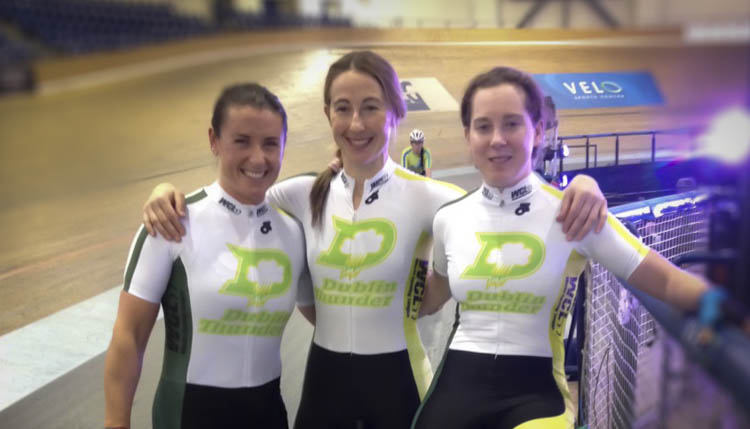 18 Mar Dublin Thunder is coming with Moran, Mitchell and Gurley

CARSON, Calif. — Rowing solo in serenity on the River Thames in England is a vast departure from the high-speed and raucous nature of track cycling. But it’s the transition Eimear Moran made about 1 1/2 years.

And at age 31, Moran is excelling on the velodrome as quickly as she did as a single sculler and in team boats on the international circuit for 10 years. Last year, she debuted on the national level on the track and claimed four diverse gold medals, the 200-meter sprint to the 10-kilometer scratch race. She claimed 15 national rowing titles, many as a teenager.

Moran of Tullamore, Ireland, this week is a sprinter for the Dublin Thunder, a jovial squad of Irish riders. It’s one of two international squads among six competing this weekend in the debut of the World Cycling League at the VELO Sports Center.

“Basically, it’s all about a race atmosphere and I love the team,” Moran said prior to a team practice. ”The cyclists are not cycling for themselves, but for their teams. The whole set up is for the audience. It’s going to be mad. Different tracks have different atmospheres. You walk into this track and see all the flags, and there’s a feeling about it. It’s friendly without even anyone being here.”

The Dublin Thunder also has added motivation the week. Its last practice before the two-day competition was held on St. Patrick’s Day, the day celebrating the patron saint of Ireland.

“I’ve been traveling the world the whole winter,” said Fintan Ryan, 19, of Ashford, Ireland, the Thunder’s youngest riders who’s visiting the United States for the first time. “But I love the culture here. The American people are lovely, and being here on St. Patrick’s Day? It’s really cool.” 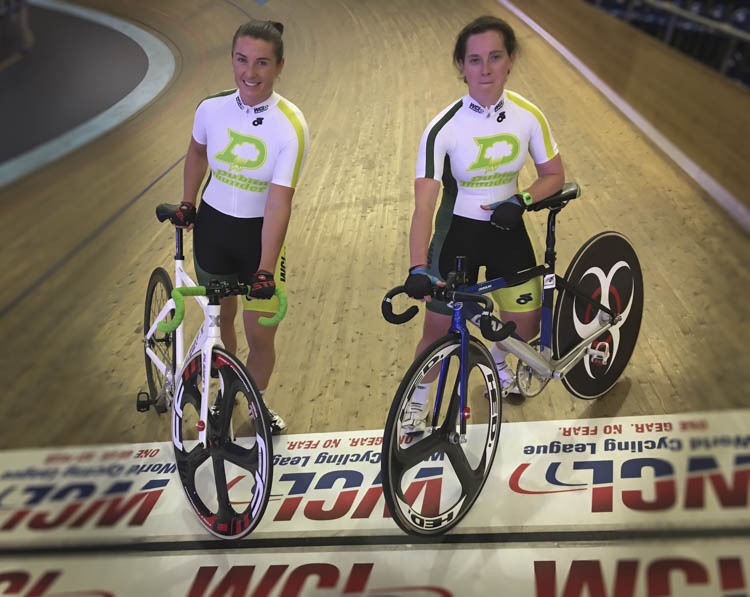 From Left to Right: Eimear Moran and Lydia Gurley of the Dublin Thunder. Image @ Steve Brunner/2016

Like his teammates, Ryan is impressed with the track at the VELO Sports Center. In Ireland, famous road cyclists like Sean Kelly and Stephen Roche are sports icon, but track racing is still developing. But the velodrome located on the fringe of Cal-State Dominguez Hill campus reminded the young Irish rider of six-day races, most notably held in Berlin, Germany.

“That’s the only thing that come close,” said the 2015 national kilometer titlist and successful points race riders. “Even then, it’s nothing like it. I’m really interested to see how it goes. It’s sexy in a way. It’s exciting for the spectators and it’s exciting for us.

The Thunder, like the other five teams competing, includes four men and three women. Only one of the Irish riders, Con Collis, has ridden at VELO Sports Center before. He was a pilot for a tandem team competing in the para-cycling World Championships.

Although the Irish riders have competed on tracks around the world, the facility this week is unique. The Thunder’s home velodrome is a 460-meter outdoor track with a 20-degree bank on asphalt. The venue here is the only indoor track in the United States and is banked to 45 degrees.

View more about the Dublin Thunder.